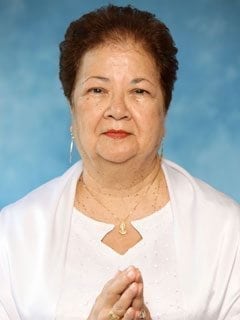 Jasmini Ananda was born on the carnival island of Trinidad, a tropical paradise in the West Indies. She is the mother of two grown-up daughters from a previous marriage, but in a spiritual sense has children all over the world and is often referred to as Mother.

From a very young age, Jasmini was always seeking and questioning other religions and philosophies, and after a long search for a higher love and truth, she learnt to meditate in 1978 under Gururaj Ananda Yogi - The Greatest Spiritual Master of the 20th century.

From the moment she first made eye contact with Gururaj, an exchange of spiritual electricity touched her heart deeply. Gururaj gave a Satsang/Lecture about love, after which she realised that this was the correct path to follow. Jasmini knew in her heart that there had been nothing that touched the core of her being so profoundly. The personal benefits she derived from meditating transformed her life so incredibly that she knew she could not go through her life without passing on to others these profound truths and realisations. Two years later she became a teacher and eventually a prime disciple of Gururaj.

She always prayed to God to send her someone to love and for someone to share the path with her, and her prayers were truly answered when she met Rajesh in 1979 and introduced him to meditation. This unity of two hearts entwined to become one love and became a major force and support system through which Rajesh and Jasmini would help Gururaj lay a firm foundation for his teachings in the UK and internationally. As the couple unfolded, their love for each other began its own journey of unfoldment.

The name Jasmini means “The most beautiful flower in the world” - a name given to her by Gururaj, a true reflection of the depth of beauty and love that emanates from her. As her spiritual path unfolded, great realisation dawned and it soon became apparent that her life had a greater purpose and mission.

It is clear for those with eyes that can see that she has become a true Yogini (female yogi). Many have witnessed her Satsangs/Lectures and have seen her transcend the ordinary mundane levels of the mind, allowing these powerful energies to speak through her, sometimes sending shivers down the spine of the observer. Other times she will speak in silence, pouring her love and the most profound wisdom to all. These few adjectives describe her well, but words fail when you look into her eyes and glimpse the depth of her love, as she is like a powerhouse emanating love all the time. Her face has a timelessness about it, aglow with love, laughter, wisdom and strength combined with serenity, which caresses her features. That warmth brings comfort to so many!

Jasmini has a remarkable one-pointedness and devotion, and through these qualities has enabled the teachings of Gururaj Ananda Yogi to go forward, touching and transforming the lives of thousands of people now and for future generations to come.

Gururaj knew that after his physical passing his teachings would not succeed if there were no living examples to convey his message in total realisation and purity.

Jasmini and Rajesh became living examples showing that all that Gururaj taught could be achieved in this lifetime, and so with all three hearts merged as one, the mission to serve humanity continues now under the spiritual guidance of Guru Rajesh Ananda and Jasmini Ananda Yogini.

Love is neither born nor created. It is a  world of existence in itself. To know this existence requires total sacrifice and surrender of oneself to the bigger Self that is within us. The beauty lies in that while probing the “internality,” we also appreciate the externality.…….Gururaj Ananda Yogi