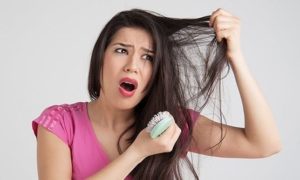 The world is a very stressful place these days, particularly for young people who are facing record unemployment, lower salaries and little to no chance of getting on the property ladder – with life stresses now being held to account for hair loss in women in their 20s, who could benefit from practicing certain meditation techniques.

According to a study by L’Oreal Professionnel, while hair loss is typically seen first aged 38, one-third of women polled said their locks had already started to thin, with one-sixth saying they first experienced this by their 30th birthday. Furthermore, eight per cent said thinning had occurred by the time they reached 25.

Half of the men who were suffered baldness or thinning hair put this down to pressures at work and at home, with L’Oreal ambassador Adam Reed saying the results leave little doubt that stress is the biggest factor for women facing thinning hair.

“British women are facing increasingly stressful lives as they struggle to balance work-life pressures and their hair is suffering as a result,” he observed. “Maintain a positive attitude and move forward with steps such as a healthier diet.”

Meditation could really help you deal with whatever life decides to throw your way, so if you’re feeling the pressure and don’t think you can cope, why not try some of the different techniques. Just practicing a twice a day for between 20 and 30 minutes each time could really make a difference where your health and wellbeing is concerned.

If I want to make you happy there is only one thing I can do—love you. I could appeal to your logical mind, but that is not what we want. All kinds of things please our minds. Your mind will agree with a certain theory or philosophical proposition, but as time goes on you will find that theory to be of no value to you, and change it. The mind is fickle. Mental contact has very limited value. The greatest contact that can be made is not from mind to mind, but from heart to heart. As we go deeper through our meditational and spiritual practices, the movements of love become less and less. Then the reality of love is known . . . stillness…… Gururaj Ananda Yogi