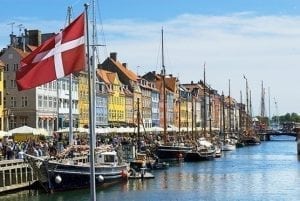 From mid-February FISU will again have a meditation teaching centre in the heart of Copenhagen.

In Gururaj’s days he went there regularly for courses and promotion. I knew this personally as I was a travel agent back then and I had to take him two or three times a year to the Danish Embassy in beautiful Sloane Square, Knightsbridge.

Due to the apartheid regime, Gururaj was always reluctant to apply for a visa in his own country of South Africa as his passport could have been confiscated due to his openness against the regime.  On numerous occasions he was threatened with arrest because of speaking publicly about unity between different skin colours and creeds.

He would arrive from South Africa on an early morning aircraft at London Heathrow where I would be waiting for him, and then I would drive him to the embassy.  We would sit eagerly waiting to hear the telex confirmation of his application from Copenhagen which was audible from where we sat.  It was always a challenge as his aircraft for Denmark would be during the same afternoon.  So you can imagine the delight when that telex chattered its confirmation.  He was never refused a visa, nor did he ever miss his flight.

Over the winter period, the Danish pages of our website have now become the 2nd most popular of any of the published languages, which is quite amazing for a small country with a population of 5.614 Million.  We now have centres in Næstved, Søborg and Copenhagen.

We are planning some promotions this year and will update you soon about these!

The kind of love which is most common with 99.99 percent of people is a kind of business: “I give you this and you give me that in return.” Pure love requires no return. When a sage says he loves the world, humanity, and every creature, he does not expect any return for it whatsoever, because he loves for the sake of love. That love within him is so powerful that it just expresses itself. In other words, he can’t help loving because he is love…….Gururaj Ananda Yogi